Being a mother can be easy, but being a friend to your kids can prove to be more difficult. However, younger children are more than happy when you play with them or come up with some innovative, unique games for them, which in turn creates a strong bond of friendship forever. And what could be better than the indoor games you enjoyed back in your childhood. Today we are highlighting some fun indoor games for kids this season.

Yes, it’s time to build something up! Use any small or fancy thing to construct a tower. It can be made up of popsicle sticks, colorful drawing sheets, glittery paper, or any kind of old cardboard. Let your kid explore their creative side. This game could be played by two, three or more children, depending on the amount of things you have available; the one with the tallest tower is the winner.

What child doesn’t like magic? Parents, all you need is a coin and 3 cups. Place the coin under one of the cups and shuffle them. Ask the kids to find the right cup containing the coin – and remember, they only get one chance! This simple trick that requires no magical skill at all will amaze your younger children over and over again!

12 Signs That You Are In True Love

Freeze might sound like something cold, but it’s actually a dancing game! First, get your kids to pick some of their favourite songs. When the music plays, they dance. When the music stops, they freeze, in whatever position they’re in! The one who stays frozen for the longest time is the winner! 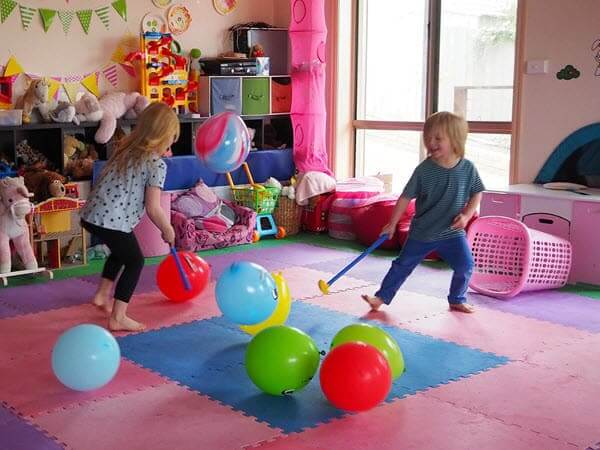 This game is suitable for a larger group of kids, when they need to be divided into smaller groups. Fill some bags with different props like toys, balls, playing blocks, ribbon, and a sock. Distribute the bags among the groups and tell them to come up with a skit within 15 minutes. Listen to their raw and exciting stories and have fun with them.

This is a game for which you just need some masking tape. Highlight a narrow path around the house using the tape, and then instruct the children to walk on the tape, one foot in front of another, until they reach the end. For extra complexity, try telling them to go backwards!

Found you! The most popular indoor game of all time is, of course, hide and seek. One child has to close his eyes and count aloud, while the others dash off to hide in the allotted area. The ‘seeker’ then looks for the ‘hiders’! The prize for the last ‘hider’ found? He become the seeker for the next round!

Kids love adventure, especially when it’s combined with prizes or rewards. Hide some coins or new toys in difficult-to-find places around the house. Then leave some clues on small slips of paper; the children then have to follow the clues to find the treasure waiting at the end!

4 Best Ways to Plan Your Kids Parties to Multiply the Joy!

A simple circle game, Hot Potato gradually eliminates child after child before you find a winner. Children sit in a circle and pass a potato (or other simple object) from one child to the next. When the music stops, the child holding the potato is out! They must leave the circle. Eventually, there’s just one child left. They’re the winner!

Kids will learn to use and expand their listening powers in this game. Initially, show them an array of different yet simple household objects. Them, ask them to cover their eyes while they listen to the sounds of objects you are holding. The one who guesses all the objects correctly wins.

One player in the game is ‘Simon’, while the other must all do as he says. But be careful! You must only do as Simon says when he starts by saying ‘Simon says…!’ If the action doesn’t have ‘Simon says’ at the start, but you do the action anyway, you’re out!

Impress your kids and interact with them like never before with these fun indoor games. What’s more, everything that you require for the games mentioned above is available in your own home, so no need to buy anything special. Help them with their creativity and growth with these indoor games.