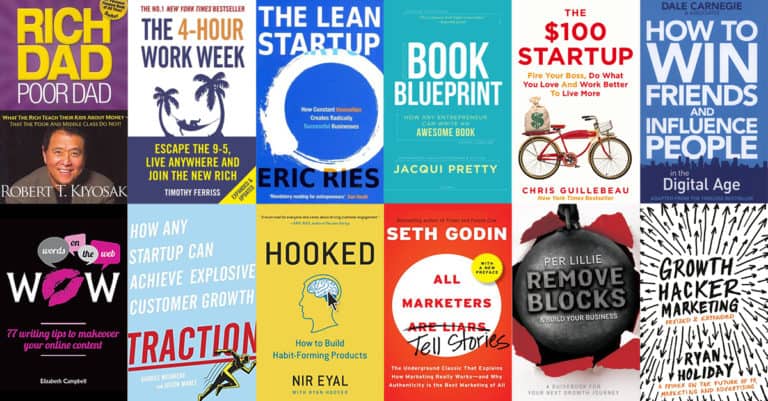 The business world is an endeavour in which you need to have both knowledge and skills to be successful. Most of the time people need support when it comes to business. They tend to turn to business consultants, business colleagues, family, and friends for specific ideas and advice. You are lucky if you are that kind of person, surrounded by people with a strong business sense, because they can lead you on the right path. However, there are people who are not so lucky and tend to seek business advice elsewhere. But don’t worry, there are many books and resources that can help you. So here are the 10 best business books that will fill your brain cells with many good business ideas.

Read Also: 30 Important Lessons To Bootstrap Your Startup In 2019

Contents show
Top 10 Business Books To Read
1. Think and Grow Rich
Author: Napoleon Hill
2. How To Win Friends And Influence People
Author: Dale Carnegie
3. The 4-Hour Workweek: Escape 9-5, Live Anywhere, and Join the New Rich
Author: Timothy Ferriss
4. Zero to One: Notes on Startups, or How to Build the Future
Author: Peter Thiel
5. Good to Great: Why Some Companies Make the Leap… and Others Don’t by
Author: Jim Collins
6. The E-Myth Revisited: Why Most Small Businesses Don’t Work and What to Do About It
Author: Michael E. Gerber
7. Awaken the Giant Within
Author: Tony Robbins
8. The Intelligent Investor
Author: Benjamin Graham
9. The Outsiders: Eight Unconventional CEOs and Their Radically Rational Blueprint for Success
Author: William Thorndike, Jr.
10. Business Adventures: Twelve Classic Tales from the World of Wall Street by
Author: John Brooks

Reading great books not only gives you the opportunity to get creative ideas and advice that you really need but also helps you gain insight into the mindset of successful and great business people. Some of these top business books are the personal favorites of billionaires like Bill Gates and Warren Buffet. Do you see? Even self-made billionaires need the guidance of other people to be successful in their own industry.

If these billionaires started with nothing and have grown as big as they are now, then surely their hard work and the kind of advice they have received from business books are the main reason for this. You can also become one of them by practicing the principles listed in these books. What are you waiting for? Browse through the list of these top 10 business directories and select what you want.

Think and Grow Rich was written in 1937 and has become one of the leading business books. It was considered by many business people to be the best book because it offers great ideas for personal development. By 2011, 70 million copies had already been sold worldwide, even though the first book was published during the Great Depression.

Napoleon Hill deliberately studied the characteristics of successful people he knew personally. These people had achieved success in various fields and professions in which they were active. This book is not only for business people, but also for anyone who wants to become as successful as the big players in today’s market.

Napoleon Hill gave 13 steps, which are primarily focused on the philosophy of personal achievement. These 13 principles include desire, faith, autosuggestion, special knowledge, imagination, organized planning, decision, persistence, power of the mastermind, sex, the subconscious, the brain, and the sixth sense.

2. How To Win Friends And Influence People

This particular book by Dale Carnegie has sold 15 million copies worldwide since its first publication in 1936. It is one of the first self-help books ever published and became a bestseller. The key points of this book have proven to be effective. Warren Buffet himself attended Carnegie’s course on How to Win Friends and Influence People when he was just 20 years old and applied what he had learned to his dealings with people. This made him one of the most respected businessmen in the industry.

The book had a one-page overview that showed the reader 12 or so things to expect from the book. However, it was only included in the original 1936 version, while in the 1981 new edition, 4 of the 12 key points were excluded and only 8 remained.

The book also has 6 main sections and its core principles are as follows:

A self-help book written by Timothy Ferriss often makes it into the top 10 business books to be read. It is typically a reflection of Ferriss’ own self-journey. As a businessman, Ferriss was a workaholic and worked 14 hours a day in his own company, BrainQUICKEN, a sports nutrition company.

Tired of his long hours of work and neglected leisure, he undertook a three-week sabbatical year in Europe. He then continued his journey across Europe, Asia, and South America. During his travels, he developed the habit of checking his emails only once a day and hiring virtual assistants for some of his small daily tasks. On his four main chapters he used the acronym DEAL, which stands for:

Definition: It is the ability to find out what the person wants for himself and to stay away from the expectations of society. It also deals with the price that a person has to pay to reach his or her goal.

Automation: This means the development of a sustainable source of income such as automation, Google Adwords, AdSense, drop-shipping, and out-sourcing.

Liberation: This last chapter is about freedom from a place and the work of a person.

4. Zero to One: Notes on Startups, or How to Build the Future

This book was published on 16 September 2014 by Peter Thiel in collaboration with Blake Masters. Peter Thiel is not new in the business world, as he is already considered a successful venture capitalist. He is one of the founders of PayPal as well as the earliest external investor in Facebook, who provided the then start-up company with a capital of $500,000 in exchange for 10.2% of its shares.

Since then, Thiel has been one of the directors of Facebook. Thiel’s business book Zero to One helps its readers to start their businesses, focusing on things that help readers to build their business and make it a successful enterprise. Thiel explained that the reader should work hard to create something extraordinary and unique.

5. Good to Great: Why Some Companies Make the Leap… and Others Don’t by

Published on 16 October 2001, this management book helps readers to understand the specifics of the companies that have been successful. Size is defined in the book as the financial performance of the company, which over a long period of time should be several times higher than the average market. Collins found that the companies that went from good to large have seven characteristics in common, and these are

This book sold 4 million copies and the details of the books have been perfectly studied since the 5-year project, which included 6000 articles, 2000 pages of interview transcripts and 384 megabytes of computer data.

6. The E-Myth Revisited: Why Most Small Businesses Don’t Work and What to Do About It

Michael Gerber is the founder of Michael E. Gerber Companies, a consulting firm for small businesses. Over the years, Gerber’s experience in dealing with small businesses has enabled him to identify similar characteristics and a pattern of companies failing in the face of those that have become successful. He explained that 40% of companies fail in the first year and 80% of companies that survive the first year will fail in 5 years. Then another 80% of survivors will fail within the next 5 years.

SEE NEXT:  Everything You Need To Know About A Lead Poisoning Lawsuit

Gerber noted that very few of those who were successful had a different approach than those who had failed. He quoted that the companies that tend to fail belong to the so-called “technicians”. These are the professionals who have started a business in their field and when their company becomes a hit with their customers, these technicians tend to do the work on their own and not pay attention to the other aspects of the business. They simply find themselves torn, stressed, understaffed and overloaded by all the work they have done, which will cause them to give up their business.

7. Awaken the Giant Within

Tony Robbins is a self-help author, financial educator, and motivational speaker in one. Awaken the Giant Within is just one of Robbins’ best-selling books, the other two are entitled Unlimited Power and Money: Master the Game.

In this business book, Robbins stressed that self-control is the key to a quality life. Once you apply the basics of self-control to your life, you can take control of it and the forces that will determine your destiny. It is important that you have a strong belief system that is well established and strengthened by you.

Once you have built your own belief system, you must follow its direction and strive to achieve all you want in life as well as in shaping your own destiny. You can also use this belief system to influence others in what you say, do and think. The book will also help you develop strategies that can help you strengthen your relationships with others and build your finances.

The first book was published in 1949 and has been revised several times since then; the last revision took place in 1971-1972 and was published in 1973. In 2003 another edition of the book with comments and footnotes was published, made possible by Jason Zweig. The book is considered by many to be the stock market bible because of its long-term strategies. Graham also pointed out that people should value investment and helps his readers avoid certain investment mistakes.

9. The Outsiders: Eight Unconventional CEOs and Their Radically Rational Blueprint for Success

William Thorndike, Jr.’s The Outsiders, considered by Forbes to be one of America’s most important business books, provides an insight into eight of the world’s best Chief Executive Officers when it comes to capital allocation. The 8 CEOs presented in this book all have an investor’s attitude that sets them apart from the others. CEOs usually have to do two things well:

(a) Handle business to optimize earnings and

(b) Deploy the earnings

10. Business Adventures: Twelve Classic Tales from the World of Wall Street by

Business Adventures, one of the best in the top 10 business books to read, was published in 1969 and was revived when Bill Gates stated in the Wall Street Journal that it was his favorite business book, recommended to him back in 1991 by co-billionaire Warren Buffet.

Brooks described the stock market as “the daytime adventure serial of the well to-do.” In his book, he eloquently described what happens on Wall Street and how iconic companies become known through a particular moment of celebrity or fame. The book was very well written considering it was published in The New Yorker and included the drama and adventure of America’s Wall Street.