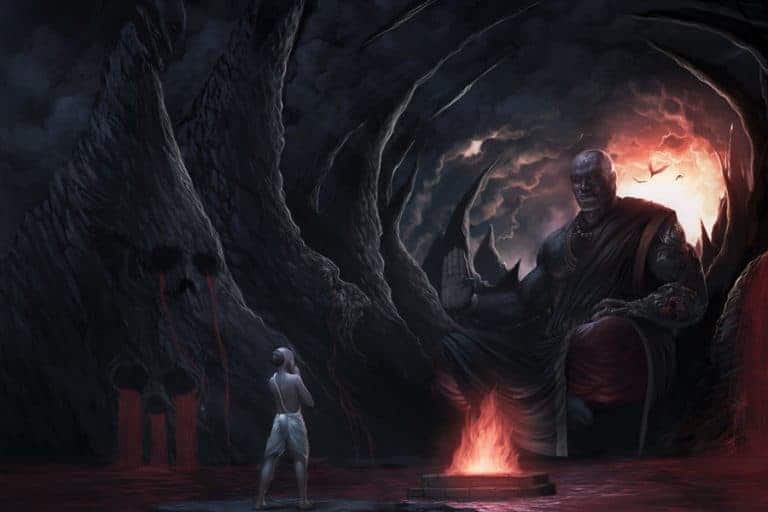 Contents show
Death – the only certainty
Death in Hindu Mythology
1. It is only the mortal, physical body that dies
2. The concept of ‘seven lives’
3. The ultimate freedom, or Moksha
4. Swarg or Narak (Heaven or Hell)
5. Yama is only an account keeper
6. Rebirth may not be immediate
7. We all can remember our previous lives
8. Karma carries a lot of weight
Conclusion:

Death – the only certainty

We have all heard the sentence that death is the only certainty in life. It is the only thing that we humans, despite all the progress we have made, have not yet been able to understand or control. That is also the reason why it remains man’s greatest fear to this day. People fear death more than they fear anything else! The unknown that happens after death also leads to its mysticism. There are some interesting facts about death in Hindu mythology.

Since our childhood we have heard many stories about death and what happens to people after death. We have been told that our ancestors are in heaven with God, or that they became stars that sparkle in the sky, etc. Every religion and civilization has had many different and exciting things to say about death. Even Hindu mythology has much to say on the subject through the various scriptures handed down from ancient times. These include the famous Bhagavad Gita, the Brihadaranyaka Upanishad, and also some other manuscripts mentioned in the Puranas.

The most important and exciting aspect of all these scriptures is that death is connected with the soul and reincarnation. Yes, Hindu mythology has some fascinating things to say about death that can change our views about death. Here are 8 interesting facts that will make you understand death and will change your thinking and maybe also your fear of death, because it is explained and is no longer the unknown.

1. It is only the mortal, physical body that dies

Strange as it may seem, we are not defined by our bodies, although we identify ourselves through them all our life. It is the soul or ‘Atma’ that belongs to us, and it leaves the body when we die. It is said that the human soul is immortal and continues its journey, perhaps to be reborn in another body. This concept of rebirth or reincarnation is also represented by the different avatars or forms that Lord Vishnu takes to be born on earth and save it from crises. Death can be compared to a form of sleep from which we wake up, except that our soul is in another body!

SEE NEXT:  10 Surreal And Strange Abandoned Places In The World

2. The concept of ‘seven lives’

We, as humans, have seven lives to live! It is the “karma” or the actions of our present life that decide whether we are reborn as human beings in the next life or not. If we do good deeds, it is said that we will be reborn as a human being, and if not, then as something else, according to karma.

Also Read: 20 American Customs That May Be Offensive In Other Countries

3. The ultimate freedom, or Moksha

It is also said that after seven lives our souls attain “moksha” or liberation or freedom from rebirth. It is also said that those who have lived a highly ideal life with only good deeds will attain “moksha” and be free from rebirth. There are also theories in Hindu scriptures that say that a person is only reborn when he has unfulfilled wishes. The soul returns to fulfill these wishes.

4. Swarg or Narak (Heaven or Hell)

How many times have we heard that those who have angered others will surely go to “Narak”, or hell to suffer for their misdeeds? When we were children, we heard our grandmothers and grandmothers tell stories about what happens to bad people in Narak. “Swarg” is defined as a heavenly place where the gods dwell and everything is beautiful and good and people are happy. In a way, our grandmothers are urging us to be good by quoting these stories.

According to Hindu mythology, there is actually a Swarg and a Narak. It is your good or bad deeds that decide where you end up. Interestingly, it also says that depending on the severity of your deeds, good or bad, there are several levels of Swarg and Narak that you may end up on.

The bad news is that it is not known in advance where you will land and what kind of good things you need to do to get to the top! “Just do good” is the mantra. Why take risks?

According to Hindu mythology, Yama is the god of death, easy to identify with a noose in his hand, and riding on a buffalo. He is said to have been the first person to die and to have made his way to the heavenly abode, thus becoming the God of Death who takes care of the deceased. Different scriptures and Upanishads give him different characteristics. Simply put, Yama is more like the chief accountant who keeps the balance sheets for each of us. He keeps a record of our good and bad deeds. He is assisted in this task by Chitragupta.

SEE NEXT:  50 Best Travel Tips To Save Money When You Are Travelling Overseas

When a person’s time is up, they are taken to Yama’s residence where Chitragupta reads the accounts. On this basis, Yama assigns the right place for the soul.

6. Rebirth may not be immediate

Contrary to what many people believe, rebirth or Punarjanma does not have to be immediate for a soul. It is possible that the soul has to wander around for a while; especially if the person’s death is due to unnatural causes such as suicide or murder and has unfulfilled desires. It sometimes takes years for the soul to find suitable conditions to be reborn in another body.

7. We all can remember our previous lives

Yes, hard as it may be to believe, the memory of our past lives is stored in our subconscious or unconscious. It is said that only people who are pure and can reach the heights of self-realization through meditation can connect to this memory. There are many cases where people have talked about their past births. There are also regression practitioners from past lives who help people do this through hypnosis etc. This has also been used as a healing technique.

8. Karma carries a lot of weight

Contrary to what we say, it is not God or Yama who judges us, but we are judged purely by our deeds. Yama is only the person who is ordained to fulfill the task of giving the soul its place.

When you think about it, death is not such a bad thing after all. It is indeed fascinating because the possibilities are so endless. It’s like embarking on an adventure in a place about which, apart from hearsay, we do not have much information. What’s more, even Google can’t help you with this, and you can’t come back and write a review about the trip!